According to the information released by The Press Information Bureau, there are 530 MillionWhatsApp users in India. While there are 448 Million users of YouTube and there are 410 Million as well as 210 Million, Facebook and Instagram users, respectively.[3] Social Media today has not been just a mode of entertainment but it has evolved into an arena for trade and commerce activities as well. It has also upheld the basic criteria of transmission of information and it has also accommodated a space for people to freely express their views as well as opinions. 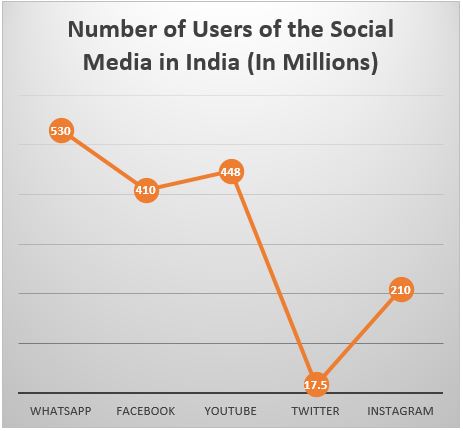 Social Media Control- How to Bell the Cat!!

The lockdown and corona phase in India provided the country with a threshold and introduced one to the stark reality of their reliance over social media platforms. The deliberations clearly bring to the dawn that the reliance of people on social media is highly treacherous as there is a high possibility of its misuse at this juncture. In the recent years, there has been a rampant use of social media to abuse women[4] and to even infringe with people’s privacy.[5] There had been a devoir of a specific mandate which restrained the abusers or the misusers of social media. In such circumstances, the absence of a robust complaint mechanism wherein the ordinary users of social media and OTT (over-the-top) platforms could register their complaint and get their grievances redressed within defined timeline further aggravated the victim’s helplessness. It was also found that usually the social media platforms are supposed to work as intermediaries but more often than not, they adopted to the role of publishers or editors of information.[6]

The Information Technology (Intermediary Guidelines and Digital Media Ethics Code) Rules, 2021 appears to have resolved these issues. The IT Rules, 2021 have divided the social media intermediaries into two categories. The two categories are as follows:

Due Diligence by Intermediaries

Display of Privacy Policy and Usage of Personal Data- Rule 4 entails that the intermediary is under an obligation to prominently publish on his website or application, or both (as the case maybe), the privacy policy and the usage of personal data or information for its users.[10] Furthermore, the privacy policy or user agreement should be drafted in such a way so that it embraces that the user is under the obligation not to host, display, upload, modify, publish, transmit, store, update or share any information which is derogatory to the rules of the society or unethical or defamatory to the general public or misleads the general public.[11] Any information which so harms the dignity of a person would be covered within the ambit of this specific provision.

Information under unity, integrity and sovereignty of the State– Any information that is so under the unity, integrity and sovereignty of the state would not be entertained as per the specific provision. Furthermore, the intermediaries are under the obligation to notify the users that in case such an unethical information is transmitted, then it would call for either termination of their account or removal of the information that is not in conformity with the user agreement or privacy policy.[12]

Specify details of Grievance Redressal Mechanism- The intermediary is to publish on its website or application or both, as the case may be, the name of the Grievance Officer and his/her contact details as well as mechanism by which a user or a victim may make complaint against violation of the provisions of Rule 4 or other matters pertaining to the computer resources made available by it. Moreover, the Grievance Officer is under an obligation to acknowledge the complaint within three working days and resolve the same within one month from the receipt of the complaint.[15]

Removal of information portraying person in bad light, obscene acts- Furthermore, an intermediary is under the strict compulsion to remove an information within twenty-four hours on the complaint of a person which portrays such a person in bad light or exposes their private parts or shows such a person in a sexual act or nudity.[16]  In regard to the aforementioned burden, a complaint can be filed by an individual or any person on his/her behalf.

Monthly Compliance Report- Subsequently, additional due diligence is to be observed by the significant social intermediaries as per the Rule 5 of The Information Technology (Intermediary Guidelines and Digital Media Ethics Code) Rules, 2021. It enumerates upon the aspect of the appointment of Chief Compliance Officer, a Nodal Contact Person and a Resident Grievance Officer. It also adds that all of these officers should be resident of India. Mandatorily, there should be a publishing of a Monthly Compliance Report. The said report should contain the details of complaints received and action taken in pursuance of the said complaints as well as details of contents removed proactively. The physical presence of such an officer is highly imperative.

However, the issue that lies at this juncture is the unchartered possibility of the same since many intermediaries claim (especially WhatsApp), that the information shared by them is through an end-to-end encryption. The same is presently being determined by the through the case of Facebook Inc v. Union of India.[17] Initially, the case was filed for adjudication in the Madras High Court. Subsequently, technology giants like Facebook and YouTube were impleaded as parties in the case. Facebook later on approached the Supreme Court because the matter was sub-judice in a couple of other High Courts such as the Bombay High Court and the Madhya Pradesh High Court. The main argument made by Facebook / WhatsApp was that it uses end-to-end encryption which makes it impossible to track the originator of a message and that even WhatsApp does not have decryption keys and therefore, does not have access to the messages itself. The Supreme Court is currently adjudicating on the issue of how the intermediaries can trace the originators of a message shared on their respective platforms.

Voluntary User Verification-One of the intrinsic provision introduced in the IT Rules, 2021 is the ‘Voluntary User Verification.’[18] The users who wish to verify their accounts voluntarily shall be provided an appropriate mechanism to verify their accounts and provide with a demonstrable and visible mark of verification. However, there is an ongoing debate with regard to the whole ordeal of the user verification being only voluntary.[19]

Furthermore, any information that is posted by a user and contrary to the provisions of the IT Rules, 2021 must be removed. However, the user must be given an appropriate opportunity of being heard.[20]

Publishers of News in The Digital Media

The social media intermediaries are not all that are regulated through the enactment. The IT Rules, 2021 also endeavors to regulate the publishers of news in the digital media.[21] It works upon the grievance redressal for the same in three stages.[22] They are enunciated as follows:

The IT Rules, 2021 enunciate that the publishers of news in the Digital Media would be required to observe Norms of Journalistic Conduct of the Press Council of India and the Programme Code under the Cable Television Networks Regulation Act, 1995 thereby providing a level playing field between the offline (Print, TV) and digital media. It covers within its ambit the regulation of Foreign News Media.

There is also a deliberation upon the appointment of a Grievance Redressal Officer who is to address every grievance and resolve it within a period of 15 days. There isalso a requirement for constitution of a self-regulatory body which should be registered under the Ministry of Information and Broadcasting and oversee the adherence by the publisher to the Code of Ethics and address grievances that have not been resolved by the publisher within 15 days. Such a body is to be headed by a retired judge of the SC, a High Court or an independent eminent person and it should have not more than six members.

The IT Rules, 2021 have also endeavored to work upon the aspect of the OTT Platforms (such as Netflix, Amazon Prime and Disney+Hotstar).

The Code of Ethics also deliberates that the platforms would have to adhere to the age limit and even require parental control or locks for the appropriate ages. One of the most imperative points at this juncture is that the Rules talk about the AI Automated Censorship.

The new IT Rules, 2021 have been a welcome step which puts the users of the information and the intermediaries in the form of social media on the same platform. Social media platform can certainly be used for asking questions and criticism and therefore they are an imperative tool and should be used wisely. Social media platforms have empowered the ordinary users but they need accountability against its misuse and abuse. The new Rules empowers ordinary users of social media, embodying a mechanism for redressal and timely resolution of their grievance. The proposed framework is progressive, liberal and contemporaneous. It seeks to address peoples’ varied concerns while removing any misapprehension about curbing creativity and freedom of speech and expression.

The Rules at present are under the scanner and are being objected by several groups for being anti-democratic and taking away digital rights. The Rules though stringent will play a major role in evolving social media control mechanism in the coming days and also the enforcement action undertaken against violation of IT Rules, 2021 will determine the extent of social media misuse in India in future.

The article can be accessed here.