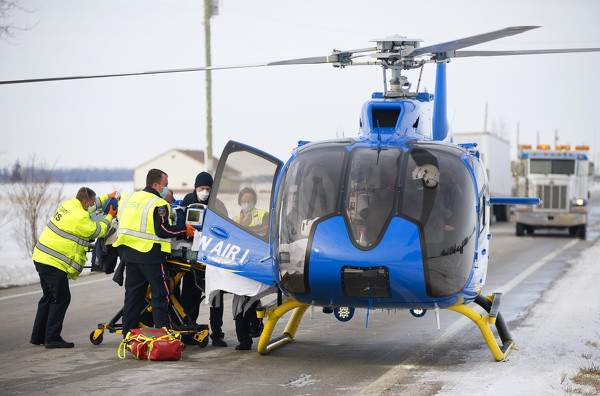 Paramedics load a individual wounded in a crash on Thursday at the intersection of S. . .

CELINA – Many people today were hospitalized Thursday following a semitrailer and a van carrying Amish workers collided at the intersection of Point out Route 49 and Frahm Pike ejecting and trapping van passengers.&#13

A preliminary investigation by the Mercer County Sheriff’s Business office showed a 2014 Chevy Categorical van was northbound on Point out Route 49 when the driver tried to convert left on to Frahm Pike in front of a southbound 2021 Peterbilt semi. The motor vehicles colleded and traveled off the west facet of the roadway and rolled above.&#13

Owing to the severity of the crash and accidents, the sheriff’s office’s traffic crash reconstruction team was sent to guide with the investigation.&#13

The van was owned by Portland LLC of Portland, Indiana, and was getting pushed by Manuel Bermudez, 53, Berne, Indiana. Bermudez was uninjured, but three of the van’s passengers have been injured, according to a news release.&#13

Harvey M. Eicher was ejected from the van and was transported by Mercer County EMS to a local hospital. Harvey H. Eicher was also ejected from the car or truck and grew to become trapped beneath it. He was flown from the scene by Lutheran Air to a trauma heart. Walter H. Eicher experienced also been trapped inside of the van. He was removed with help from a nearby hearth division. He was transported by Mercer County EMS to a community hospital. The ages and hometowns of the Eichers were being unknown at push time.&#13

Another passenger in the van, Levi B. Shetler, 32, was transported by a personal motor vehicle to a hospital for treatment method. His hometown also was unknown.&#13

The crash remains below investigation.